This is a wonderful surprise and the production is intentionally keeping it mysterious. K-actor Kim Ji Hoon will be joining the cast of tvN thriller drama Flower of Evil starring Lee Jun Ki and Moon Chae Won. His role is described as integral and important to the drama and Kim Ji Hoon himself explained that it’s unlike any role he’s ever played. Curiouser and curiouser. Kim Ji Hoon’s career the last decade has toggled between male lead and second male lead, and jumped around from prime time to small cable fare, it’s not been consistent output but he’s an actor that I always love watching if the particular drama and costar he’s with appeals to me otherwise I pass. I’m already 100% watching Flower of Evil because hello Lee Jun Ki but now it’s like getting an extra bonus so much appreciated drama gods!

END_OF_DOCUMENT_TOKEN_TO_BE_REPLACED 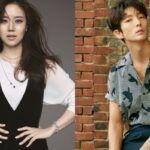 Okay, I’m in a state of happiness and trepidation with the news of this upcoming new K-drama. Top stars Lee Jun Ki and Moon Chae Won are confirmed for the K-drama The Flower of Evil, reuniting three years after doing … END_OF_DOCUMENT_TOKEN_TO_BE_REPLACED