K-actor Kim Nam Gil definitely owes SBS for giving him his first major male lead role in Bad Guy after he broke out with MBC drama Queen Seondeok. But the network bungled BG a bit by preempting it multiple times for sports coverage and each time it came back the episodes ratings would drop. It’s hard to watch a drama herky jerky in airing pattern. For his latest SBS drama Through the Darkness (Those Who Read Hearts of Evil), it’s only a 12-episode police thriller and so far has aired 4-episodes. After this coming weekend’s episodes air, SBS will preempt the drama for 3 straight weeks to air the 2022 Beijing Winter Olympics. That makes it so the first half airs then a three week break before the second half airs, but the drama wasn’t filmed with that gap in mind unlike recent season split dramas like Penthouse. Kim Nam Gil’s last drama for SBS in The Fiery Priest, he was injured filming but reportedly insisted on resuming filming before his full recovery because he didn’t want the drama to have to be preempted thereby impacting the momentum and ratings. K-netizens are frustrated SBS isn’t taking care of Kim Nam Gil’s new drama and think the entire drama should have aired after the Olympics. Can’t disagree here.

END_OF_DOCUMENT_TOKEN_TO_BE_REPLACED 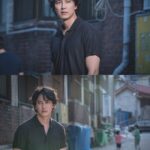 I’m glad this drama is starting after the new year in 2022 because it definitely seems too dark and serious for a Christmas holiday start. With that said, SBS is likely looking forward to the arrival of police procedural Through … END_OF_DOCUMENT_TOKEN_TO_BE_REPLACED