If there was a pitch perfect casting of manga/manhwa/webtoon character to real live actor/actress then True Beauty (Goddess as Descended) wins the prize off the bat. The drama adaptation of the same name webtoon is heading into production and the leads are confirmed as Cha Eun Woo, Moon Ga Young, and rising newcomer Hwang In Yeob. To say each looks like their drawn counterpart is an understatement lol, but then acting requires more than looking like a character and I hope to see great chemistry between the leads. The plot seems wafer thin, an ordinary girl learns expert level makeup skills to render herself a “goddess” to the public and while the premise seems problematic that’s a landmine in K-drama concept land anyways. What’s promising is the PD just did Extraordinary You last year so has a great sense of webtoon adaptations, not to mention his other well directed dramas include Mama, Dong Yi, and Cinderella Man. True Beauty airs on tvN towards the end of 2020.

END_OF_DOCUMENT_TOKEN_TO_BE_REPLACED 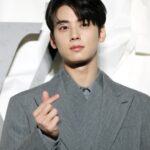 The talk on the K-drama adaptation of popular webtoon True Beauty (Korean title Goddess Has Descended) has been going on for at least two years but it looks like the drama has a time slot and a male lead now. … END_OF_DOCUMENT_TOKEN_TO_BE_REPLACED