I think Yang Zi needs to go get an exorcism because girl is on a bad luck streak right now. But then again, it feels like every C-entertainer is walking on eggshells, along with HK and TW stars who regularly appear in C-shows. The Chinese government broadcast crackdown has hit another show as the highly anticipated romance C-drama The Oath of Love (余生，请多指教 The Rest of My Life, I Entrust to You) with Yang Zi and Xiao Zhan, which just got “delayed” on the cusp of its premiere date of September 8th. The rumors were rumbling last week and this weekend got confirmed – both Hunan TV which had the broadcast rights and Tencent with the online streaming rights are postponing the drama. The rumors arose earlier when netizens noticed that the time slot for The Oath of Love was suddenly filled by another drama and it disappeared from the scheduling. The first response from the Oath production team was to insist the drama was still airing on September 8th but days later after Hunan and Tencent both confirmed it was being re-scheduled then everyone parroted the same line that it was just a reshuffling of airing time slots like any ordinary line up swaps. Yeah, sure. I don’t know which of the two leads got swept up in the 8 point restrictions, or neither and it was simply the drama being too “pretty” and “idol” and “unrealistic” that the government in general wants to keep off the screens for the time and air instead home dramas and patriotic shows and whatnot.

END_OF_DOCUMENT_TOKEN_TO_BE_REPLACED

Summer is winding down and the beginning of September as kids get fully back into the swing of school there will be a new drama to hopefully inject some buzz into what has been a dull C-drama season so far. … END_OF_DOCUMENT_TOKEN_TO_BE_REPLACED 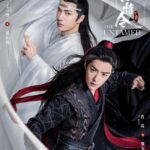 Okay, this post is to thwart the heavy hands of censorship and bring more publicity to the efforts to silence art. C-dramas have been on a fantasy, wuxia, and xianxia (combo of the two) novel adaptation kick for the last … END_OF_DOCUMENT_TOKEN_TO_BE_REPLACED