For those who want a throwback good time then check out recently completed J-dorama Hana Nochi Hare, the sequel to hit manga franchise Hana Yori Dango (Boys Before Flowers). I legit adore this story in both the manga (which I marathoned one weekend and need moar) and the dorama adaptation with fresh leads Hirano Sho, Sugisaka Hana, and Nakagawa Taisho. They created their own characters, youngsters attending the same prestigious high school years later in the narrative timeline, without ever being compared to the iconic roles and performances of HanaDan leads Matsumoto Jun, Oguri Shun, and Inoue Mao. The dorama created the throwback feels to a great shoujo love triangle with both male leads having their lovable qualities and being a great option for the female lead in different ways. Even better was having three of the four original F4 cameo, Jun and Shun showed up early while Matsuda Shota nearly stole the show with his final episode appearance. A most excellent dorama for those craving classic shoujo feels. END_OF_DOCUMENT_TOKEN_TO_BE_REPLACED 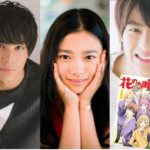 The J-dorama adaption of popular manga Hana Yori Dango scheduled for 2018 has finally been confirmed but it’s not the adaptation or rumored leading lady initially thought. TBS will be adapting the HanaDan sequel Hana Nochi Hare – Hana Yori Dango Next … END_OF_DOCUMENT_TOKEN_TO_BE_REPLACED