The Netflix K-drama machine plows on with both original new projects and sequels to successful ventures. Squid Game is already confirmed for a new season and now the platform is in talks for second seasons of three additional original dramas: D.P. (Deserter Pursuit), Hellbound, and the most recent release All of Us are Dead. The reason is the overseas success of those dramas which did really well outside of South Korea. I think there is definitely second seasons worth of stories for all three dramas, Hellbound actually ended on a cliffhanger of sorts. With that said, momentum is a beast and it will be interesting to see if the same audience interest continues when the second seasons arrive, I can’t imagine it’s anytime before 2023 or beyond, or will the fickle viewers have moved on to new entertainment trends by then.

END_OF_DOCUMENT_TOKEN_TO_BE_REPLACED 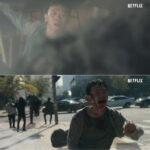 If some viewers have issues and rightly see similarities to Netflix recently premiere K-drama Squid Game to other prior works, the story and concept of upcoming Netflix drama Hellbound (To Hell) appears solely original. I do not recall any other … END_OF_DOCUMENT_TOKEN_TO_BE_REPLACED