A new movie is headed to the theaters that has been in production for over two years and will come as a two part big name and big bucket action flick. Alien (part 1 and part 2) will be released this year and stars Ryu Jun Yeol and Kim Tae Ri as Joseon era Taoists battling Kim Woo Bin and So Ji Sub as aliens in modern day Seoul as a portal opens between the two time periods. It sounds crazy and the first preview looks just as wild, like bat shit what the heck is going on but imma totally going to watch type of stuff. The director and screenwriter is Choi Dong Hoon who did The Thieves, Assassination, and Tazza so lots of hit movies under his belt. Check it out!

END_OF_DOCUMENT_TOKEN_TO_BE_REPLACED 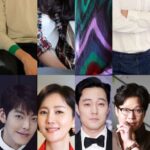 Woah momma is the first big cast movie slated for 2021 looking jam packed and exciting. Director Choi Dong Hoon of Assassination, The Thieves, Tazza, and Jeon Woo Chi will start filming the movie titled Alien at the end of … END_OF_DOCUMENT_TOKEN_TO_BE_REPLACED