Go Bai Bai He! China is welcoming a box office renaissance this summer thanks to the unprecedented success of domestic fantasy period movie Monster Hunt. Starring C-actress Bai Bai He and Jing Bo Ran stepping in for banned by China Kai Ko, the success has been credited to the fun family suitable nature of the film, the cute CGI monster Huba, and Bai Bai He’s universally beloved onscreen charm. Monster Hunt is not only the top grossing domestic Chinese movie of all time now, passing that mark only 10 days into its run, but is gunning for Furious 7 as the top grossing movie (from any country) of all time in the Chinese box office.

Monster Hunt is also only the second movie ever to gross over 2 billion yuan in the Chinese box office, as of now it’s grossed 2.1 billion while Furious 7’s full gross stands at 2.4 billion. Monster Hunt has only been in theaters for almost a month (it was released July 16th) so it’s highly likely it will catch up to and surpass Furious 7. But that race to the top won’t be as easy since this week Monster Hunt finally lost its number 1 perch at the weekly box office, a spot its held for 28 days since release. The win-win part of the loss is all thanks to leading lady Bai Bai He – Monster Hunt was knocked off the number 1 spot by the opening weekend of Bai Bai He’s new comedy movie Go Away Mr Tumor with Daniel Wu. Dang, you go girl! END_OF_DOCUMENT_TOKEN_TO_BE_REPLACED 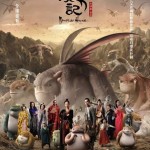 The Chinese box office has been way more fun to follow the last two weeks as all eyes have been on the Chinese language period fantasy movie Monster Hunt. What was anticipated to be a cute family film with solid … END_OF_DOCUMENT_TOKEN_TO_BE_REPLACED