I was really impressed with the young male leads of last year’s cult hit drama Extraordinary You, mainly because I had zero expectations. I’m going into upcoming jTBC drama Number of Cases (Probability) the same way with respect to male lead Ong Seung Woo, he’s so rising profile these days being a Wanna One member and later pursuing his main passion acting. For this drama, he’s paired up with Shin Ye Eun with a supporting cast of Kim Dong Joon, P.O., and Baek Soo Min, all young faces in a drama about how inexperienced teens can let crushes go unrequited even if its mutual. I’m all for the philosophy that timing is everything and to go for it because the worst thing that can be said is “No” and after that you can move on. The new drama stills look so wholesome and bright, really liking the visuals on this drama so far.

END_OF_DOCUMENT_TOKEN_TO_BE_REPLACED 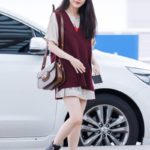 A vacation is a downer moment, said no one ever, so the cast of recently wrapped tvN drama Hotel Del Luna are all chipper and cheery at Incheon Airport earlier this week heading off to Thailand. It’s the reward vacation … END_OF_DOCUMENT_TOKEN_TO_BE_REPLACED