Rising young actor Lee Hyun Woo, still much too underrated IMO, is in talks to star as the male lead. He will play a fallen male idol singer who goes back to school. Also in talks to play an international student from Thailand is 2PM member Nichkhun, which is basically playing himself. Directing will be the PD from Prime Minister and I so I expected a light comedic touch even if this drama concept sounds way too overreaching for what really boils down to a typical school drama but with an international bent. Murim School will be fully pre-produced with an eye to get on the KBS Mon-Tues time slot in January of 2016. Despite the low ratings of Who Are You: School 2015, that drama did generate buzz among the younger generation so it’s a good bet KBS wants to capture and build upon that same base for Murim School. END_OF_DOCUMENT_TOKEN_TO_BE_REPLACED 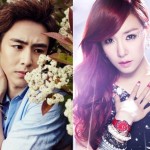 The C-ent happy romance news this past week sadly didn’t extend to K-ent, which was relatively quiet on the relationship front in recent months but has now been hit with a one-two punch of star couples breaking up. The bigger … END_OF_DOCUMENT_TOKEN_TO_BE_REPLACED

There’s a new college idol C-drama coming and this one might pique the K-fans interest because there are two K-pop idols in the main cast. The upcoming C-drama One and a Half Summer (一又二分之一的夏天) premieres June 23rd with a cast … END_OF_DOCUMENT_TOKEN_TO_BE_REPLACED

Thank god this news broke today and not a few days earlier on April 1st lest there is a first round of “It’s a joke!” reactions from the netizens. If 2013 was the year of K-entertainment actor and actress dating … END_OF_DOCUMENT_TOKEN_TO_BE_REPLACED

I don’t really do so-called Throwback Thursdays but I did do a series of posts called Oldies But Goodies that hasn’t been added to in awhile. When I started blogging this particular goody wasn’t an oldie in the least but … END_OF_DOCUMENT_TOKEN_TO_BE_REPLACED