Normally I say expect the worse so one can hopefully get anything better than that and be happily surprised. But the promos for upcoming MBC sageuk drama The Forbidden Marriage have been just that bad that I’m happy none of my faves are in it. Half the problem is the leads though, with Kim Young Dae wasting an intriguing potential in Extraordinary You and being just bad all around in any leading role since then and here he can’t even have a proper Crown Prince posture that I want to jerk his shoulder back and wack his legs with a long ruler to make him stand up straight! Park Joo Hyun is a good actress but lacking in leading lady charisma, unfortunate for her but playing a swindler type of character she’s got to be adorably sly, emphasis on adorable. The stupid poster above doesn’t help, like WTF is that for a sageuk drama and even a fusion one should at least avoid the juvenile tendencies. I hate to rag on a drama before airing but so far MBC is doing a swell job of advertising in the worst way.

END_OF_DOCUMENT_TOKEN_TO_BE_REPLACED 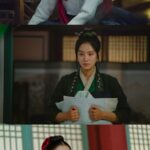 I have very low expectations for this upcoming sageuk drama lol but that’s a great thing because it has nowhere to go but up. MBC is readying for the November release of The Forbidden Marriage, taking over the Sat-Sun time … END_OF_DOCUMENT_TOKEN_TO_BE_REPLACED