It’s rare among recent years not to see Kim Soo Hyun attending last week’s Baeksang Arts Award, he’s been a staple there ever since his breakout with The Moon Embraces the Sun and onward with successive years making major hit movies and K-dramas. I can’t even say he’s passing the baton to the juniors since he’s only 29 years old, making it all the more impressive how young he was to reach his level of success and then maintaining it. This summer his thriller movie Real comes out so I’m curious how it’ll do since he’s playing a darker character and it doesn’t appear to be mainstream fare. I certainly hope he gets a new coordi by next month when he starts promoting the movie because this week his appearance at the movie premiere of The Sheriff in Town was all sorts of fashion awful. I can’t unsee the cropped pants on top of the ugly sockless white sneakers. Please my darling, why you try so hard to look like an ahjumma from waist on down? 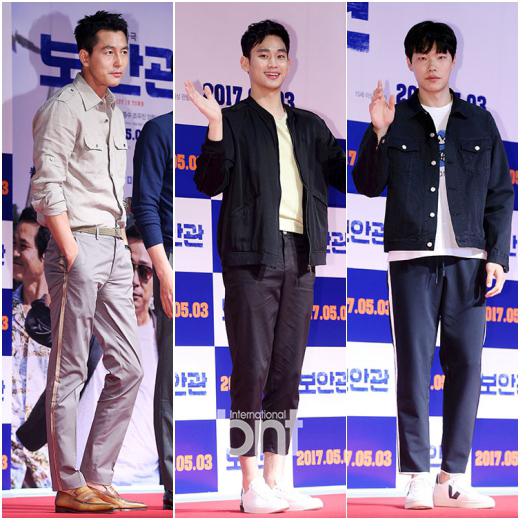 On a sliding scale of pants lengths at the movie premiere, Kim Soo Hyun is the worst, Ryu Jun Yeol is just one inch too short exacerbated by the sockless look, and Jung Woo Sung does a masterclass on how to wear perfectly fitted and right length pants.