When I first saw the just released drama posters for upcoming tvN bittersweet family drama Hi Bye Mama! it just felt like woah such a HUGE face of leading lady Kim Tae Hee. Don’t get me wrong, she’s radiant and so beautiful after getting married and having two kids since her last drama Yongpal in 2015. It’s just that the size feels too large, the poster could be just a close up but a wide scale would look less like we’re looking at her through a magnifying glass. But then I saw the other poster of male lead Lee Kyu Hyung and once you put the two posters side by side and the two leads facing each other it looks endearingly warm and lovely. They are each holding their child and looking at each other with such love, it’s going to be so sad knowing her character is dead already in the drama and just getting a second chance for a period of time ala 49 Days. 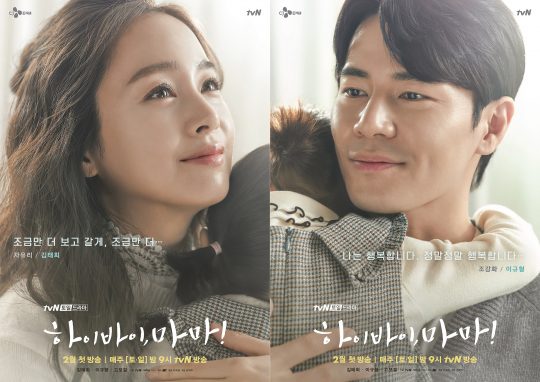