So the positive news first – high profile live-action fantasy C-drama Wu Geng Ji, adapted from the hit anime of the same name, has its confirmed male lead in Allen Ren (Ren Jia Lun). He’s been rumored alongside Li Yi Tong for this drama for months so this confirmation for those in the know is not a surprise, what is a surprise is the same day Li Yi Tong’s agency released a long personal message that she has declined the drama. The statement explained that she was offered and accepted the role and was preparing diligently for it, even declining other projects, when online rumors started that her side was adding more female lead scenes and also rewriting the female lead character to not resemble the original story. Her side claimed it’s all not true but the production did not come out and support her, and now started to promote the drama without notifying or involving her so she has decided to leave the project feeling like it’s not the right fit. Reportedly the new female lead will be Zhu Xu Dan, and much as I am not a Li Yi Tong fan I can say this is an absolute downgrade. Zhu Xu Dan is maybe a step above Angelababy and Chen Yu Qi in being a total void onscreen. Sigh, so much drama and filming hasn’t even started yet.

END_OF_DOCUMENT_TOKEN_TO_BE_REPLACED True popularity is a combination of timing (right role/right time) and talent and in the cutthroat world of C-ent with countless talents rising and on the rise it’s one misstep and off the cliff. But there are also stars who … END_OF_DOCUMENT_TOKEN_TO_BE_REPLACED 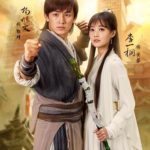 I can’t believe I’m saying this since I’m super old school when it comes to my wuxia dramas and especially when it comes to drama adaptations of famous Louis Cha novels, but the upcoming 2016 version of Legend of the … END_OF_DOCUMENT_TOKEN_TO_BE_REPLACED