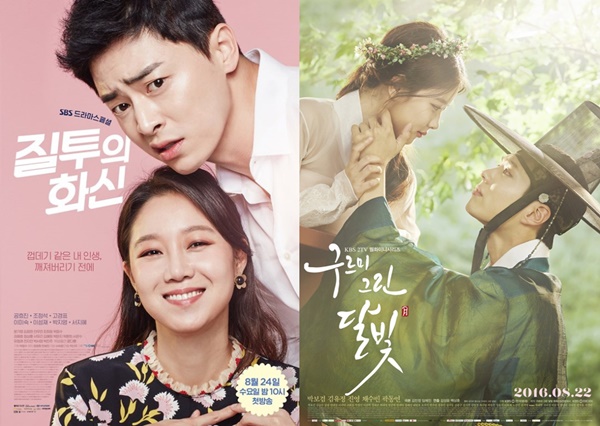 September ended with a buzz less whimper as far as I’m concerned. The summer K-dramas long over, the early fall series are all delivering their respective goods without anything upending expectations set from the premiere episodes to show me that there is something thrilling to look forward. I like most of the currently airing K-dramas, but there’s nothing pressing to engage and therefore write about.

The ranking is out for the most influential and talked about K-dramas of September 2016, with ratings leader Moonlight Drawn by Clouds retaining it’s top ranking from last month. Next is Incarnation of Jealousy, then Moon Lovers, followed by Drinking Solo, and the top five is taken by Cinderella and Four Knights. The second half of the top ten is Laurel Tree Tailors, On the Way to the Airport, Shopping King Louie, Fantastic, and Our Gab Soon. Of the top ten it’s Moon Lovers that has me on my toes for narrative and emotional heft, while Shopping King Louie is sweetness to the max with leads I love and plenty of ah shucks appeal.