It’s more good news wrapping up this October for cable network tvN as its Wed-Thurs K-drama Avengers Social Club (Baumdong Revenge Social Club) is rocking and rolling in the ratings, even above the also doing well This Life is Our First on Mon-Tues. Avengers started off with 2.900% AGB nationwide and has kept going on reaching the highest of 5.283% in episode 5 with a small drop to 5.087% in episode 6. The drama has gotten positive reviews with leads Lee Yo Won, Ra Mi Ran, and Myung Se Bin playing scorned and trod upon ladies who get their sweet revenge on wrongdoers. The drama has already doubled the lackluster ratings of its predecessor high profiled K-remake of Criminal Minds, and goes to show that ladies are really ruling the small screen this year as this is the second hit female-driven drama after Women of Dignity. END_OF_DOCUMENT_TOKEN_TO_BE_REPLACED 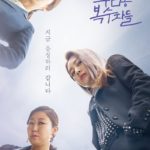 I joked recently that Lee Jun Ki and Moon Chae Won achieved freedom after they wrapped tvN Wed-Thurs drama Criminal Minds, because the K-version was so mediocre and a big disappointment vis-a-vis the talented cast and copious amounts of money … END_OF_DOCUMENT_TOKEN_TO_BE_REPLACED