The production of upcoming thriller movie The Witch: Part 2: The Other One has gone out of its way to keep “the other one” hidden until now. The first stills are out of new female lead Shin Si Ah, who plays a different character than the titular witch in the first movie which starred Kim Da Mi. There was always a talk of a sequel and fans thought it would continue the story from the first movie and it will but focused on the broader scientific experiments that created the so-called witches which are young girls with special powers. Rising young actress Shin Si Ah is basically a newbie with a few small side roles in movies until now and her casting here came after a full thousand actress deep casting call with auditions so she’s definitely getting thrust into the limelight in full force to either sink or swim. Seeing her face close up she reminds me of a young Shin Se Kyung and that’s not a bad top actress to aspire to. This sequel will also see popular stars Lee Jong Seok and Park Eun Bin in the cast.

END_OF_DOCUMENT_TOKEN_TO_BE_REPLACED 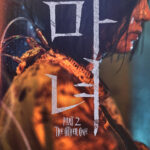 K-actress Kim Da Mi debuted in 2017 with small roles in two movies before landing her break as the relative unknown female lead in horror supernatural thriller The Witch: Part 1: The Subversion. So it make sense that the upcoming … END_OF_DOCUMENT_TOKEN_TO_BE_REPLACED