This Saturday February 13th sees the premiere of period C-drama The Imperial Doctress, which has a good shot at being a hit with C-audiences since it looks decently pretty in visuals and has the potential for super angst. Starring Liu Shi Shi as the titular Imperial Doctress, she goes through the fabled Ming courts to become the first female doctor of that era, and along the way has a complicated romance with two Emperors of the Ming dynasty. I think Liu Shi Shi may need to worry about typecasting herself as the girl who keeps falling for Chinese emperors, first there was Bu Bu Jing Xin and now this. I’m already on team Wallace Huo who plays Emperor Yingzhong (Zhu Qi Zhen), not to diss solid actor Huang Xuan as second male lead Emperor Jingtai (Zhi Qi Yu) but he’s totally not my dish not to mention a dude who gets the girl first and then turns all power hungry for more is so not for me. Check out the final preview for the drama and additional pretty stills to whet the appetite. This drama looks legit visually, I just hope my ship sails in the end so I have a reason to keep watching. END_OF_DOCUMENT_TOKEN_TO_BE_REPLACED 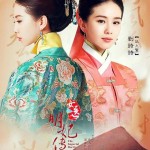 I must say C-actress Liu Shi Shi may be cornering the market on romancing royal brothers, which if history and fictional dramatic style has shown in the past almost always don’t end well. She’s gotten her own happy romantic ending … END_OF_DOCUMENT_TOKEN_TO_BE_REPLACED

If that isn’t just one of the most lovely drama stills of a fully grown up picture of Liu Shi Shi in her comfort zone of the period drama. I’ve watched her seen since she was a teenager in her … END_OF_DOCUMENT_TOKEN_TO_BE_REPLACED