Chalk it up to the best cameo so far in the cameo heavy Park Ji Eun penned Legend of the Blue Sea. So far there’s been Krystal, Kim Sung Ryung, Ahn Jae Jong, Hong Jin Kyung, Park Jin Joo, and Cha Tae Hyun, all within the first 6 episodes, but episode 7 brought the previous SBS Wed-Thurs drama Incarnation of Jealousy‘s comedic male lead Jo Jung Seok to match Jeon Ji Hyun tic-for-tic as a fellow fish out of water in Seoul.

It was a coup casting with a fabulous premise to finally make Jeon Ji Hyun‘s Shim Chung seem less alone in her weirdness and give her someone who can relate. It also created the perfect foil to make Lee Min Ho‘s Joon Jae jealous which I love to see. Episode 7 dropped a dash in ratings from 18.9% to 17.4%, making it feel like a hard push to get this drama to vault past 20% ratings, but the good news is that the competition Oh My Geum Bi and Weightlifting Fairy Kim Bok Joo remain mired in low single digits. 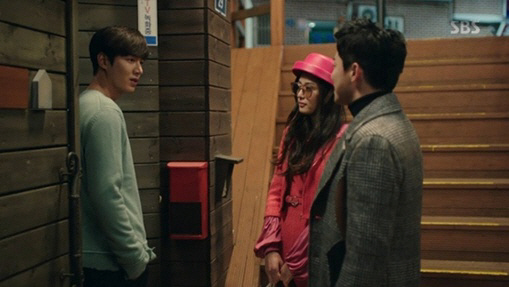