Wow, I’m rather impressed someone beat Song Joong Ki in this year’s vote for a drama category poll, but then again I don’t think Joong Ki minds in the least when it’s one of his best friends Park Bo Gum. It’s a one-two punch for these two, topping the Gallup Poll’s Top Actor/Actress poll of 2016. Park Bo Gum won by doubling up on two winning dramas in one year, first with Answer Me 1988 and ending with Moonlight Drawn by Clouds. Following behind was Song Joong Ki in the second spot with Descendants of the Sun, then his costar Song Hye Kyo in third. Park Bo Gum’s Moonlight leading lady Kim Yoo Jung came in fourth, followed by surprising fifth place winner spot for Jo Jung Seok thanks to Incarnation of Jealousy. Check out the full list below. 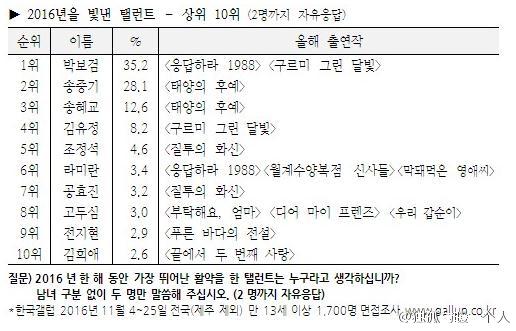