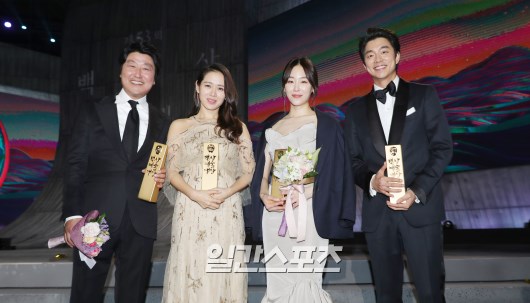 The top Korean actors and actresses were out in force on a Wednesday night in Seoul but the fashion gods were once again in absentia. The majority of the beautiful and handsome once again went the safe route in what I now call the white/black/gold/sequin/lace rotation, it’s like bold patterns, edgy cuts, and innovative embroidery is the enemy of the state. Suzy and Yoona stood out for their contrasting navy and fuschia strapless gowns that delivered the welcomed pop of vivid color to the proceedings otherwise it was nap time.

The big winners of the night was Kim Eun Sook for her television section Daesang for Goblin, which seems like a repeat of last year but it wasn’t as last year the drama Descendants of the Sun itself took the Daesang. This year it was a solo win for her and I don’t recall if any other screenwriter has won the television Daesang, which is usually split between a drama wining or a particular actor/actress in the drama. Dear My Friends won Best Drama, Gong Yoo was award Best Actor for Goblin while Seo Hyun Jin won Best Actress thanks to Another Oh Hae Young. On the film side, director Park Chan Wook took the Daesang for The Handmaiden while Song Ye Jin and Song Kang Ho won Best Actress and Best Actor respectively.