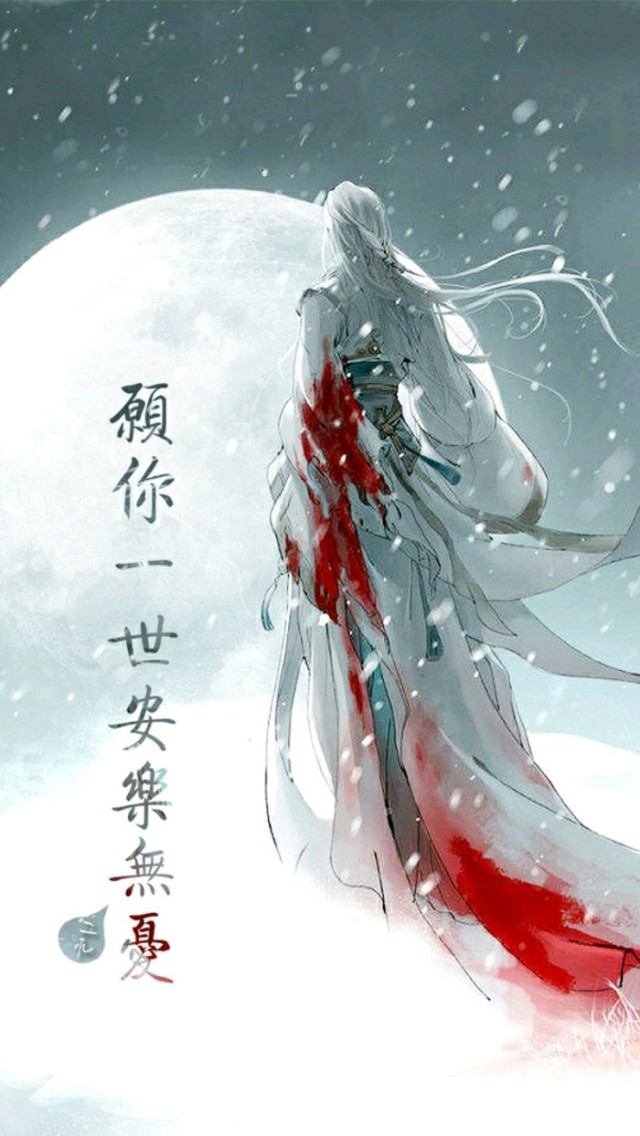 Might as well strike while the iron is hot, now that I got my book translating mojos back after a good 4 year hiatus. I posted the final chapter of Lost You Forever, my favorite C-romance novel of all time, but that’s not the final thing Tong Hua wrote for this story. She left an epilogue and it feels like she planned it all along this way. Of the three male leads, only Xiang Liu that Nine Headed Demon all in white never had any internal monologues so forget Xiao Yao even us readers don’t know what he is really thinking, But that’s rectified with this beautiful and much too short epilogue, like how I feel about his appearance as a fictional character in this epic story. Ephemeral but unforgettable, and of course he leaves with the same selfless conviction that made us love him. I’m sorry I neglected to post these two final chapters until such a long time has passed and probably many readers have moved on, but for those just discovering this gem now you can read a completely beautiful and stirring story in its entirety.

Epilogue: Wishing You a Lifetime of Worry Free Happiness

The mountain ridges were tightly nestled together as the forest trees undulated in layers.

At a canyon near the water source, rows and rows of tents fanned out. At this time it was near dark and normally the encampment fires were roaring and each tent would be lit by lamps. But to stay concealed, there was not a sliver of light and not one sound. Only squads of mud splattered weary soldiers patrolling.

Xiang Liu quietly walked past a row of tents, his snow white robe like a small breeze softly rustling through the camp, becoming the sole light in the heavy darkness of the moment. Every soldier who saw him unwittingly felt a tiny bit of ease and their mood a little lifted.

Many years ago, new recruits would complain to the old veteran soldiers “That Nine Headed Demon, why does he have to be flashy? We’re going to battle not to a matchmaking meeting, does he need to dress so eye-catching?”

Those who experienced life and death before their eyes and carried home the bodies of their comrades would smile with resignation “After you’ve been to a few battles, you will understand why!”

When those rookies would slowly feel the weight of those life experiences did they start to understand what the old soldiers meant. On the battlefield, when that all white figure appeared, he would capture the attention of every enemy and all the strongest attacks would be aimed at him. That would help save more of their troops as Xiang Liu took the brunt of all the enemy attacks. So at night in the camp, when the all white figure was spotted, no matter how near the enemy was, all the soldiers could still sleep soundly.

After burning one deceased comrade’s body after another, the remaining soldiers finally understood even more why Xiang Liu wore all white – perhaps he really was that brash and arrogant, wanting the enemy to see him; perhaps he was the wisest General who wanted his troops to always be able to see him no matter how dark; no matter the real reason no soldier dared to ask Xiang Liu directly so why he always wore white became a topic that was forever debated but never concluded.

Xiang Liu surveyed the camp and walked up to the top of the mountain to look down from the summit.

In the distance he could see fires burning, that was Ru So burning the entire mountain to force them to come out and battle. The final battle was about to arrive. All the soldiers knew their fate and they willingly chose this path in life. The world was at peace and the people were safe and secure, these Sheng Nong resistance army soldiers were now discarded in the passage of time and had become pointless. So death was the best release for them, and the most comforting final destination.

Xiang Liu sat down on a green rock and took out a piece of Fu Sang God Wood. He intently carved it and a round big bellied laughing doll started to take shape. All that was left was detailing on its eyes.

After Xiang Liu carefully and precisely finished carving the doll, he intently inspected it and was pleased. He turned the doll head down on his knee and opened the bottom to take out a crystal ball.

A clear crystal ball wrapped around an ocean tableau inside. The glittering waves had colorful fishes swimming, red coral, and a large white clamshell open like a resplendent flower. A beautiful mermaid rested sideways on the clamshell, her hair flowing like seaweed and her entrancing fish tail resting half against the white surface and half in the water. A man stood next to her, holding the mermaid’s extended hand and smiling as he gazed down at the mermaid. In the corner of the tableau a merman floated in the ocean, he appeared close to the clamshell but his distant pose made him seem like he was actually in another world and not in the same calm and serene ocean.

Xiang Liu stared at the crystal ball for some time longer before his fingernail extended into a sharp knife and he swiftly inscribe two lines of words on the ball in very small letters. Just then the moon shone through the trees and landed on the crystal ball and the two lines of words next to the merman was legible: The ability to take care of yourself, someone to rely on, a place to go – wishing you a lifetime of worry free happiness!

A gold crowned white feather giant condor dove down from the sky and perched on the edge of the cliff. He had a bucket in his beak filled with thick green Fu Sang sap. The spiritual powers were so strong a green mist was bubbling around it. The white condor Furball knew the Fu Sang God Wood seemed normal but one touch and all his fur would be burned clean off. He gingerly place the bucket down next to Xiang Liu before hopping quickly away and not daring to bother him. He curiously watched Xiang Liu’s every move.

Xiang Liu placed the crystal ball back into the belly of the big bellied laughing doll, it wasn’t too big or too small, it fit perfectly. He closed the bottom up and with the crystal ball into the belly of the doll, the crystal was water essence and the Fu Sang God Wood was a fire essence so the two opposing powers contained each other. The crystal’s ice essence was no longer bone chilling and the Fu Sang God Wood would no longer burn up on contact. Now even someone without any power could touch the big bellied laughing doll.

Xiang Liu put the laughing doll into the bucket of Fu Sang sap. The doll and the base was the same piece of Fu Sang God Wood and after setting a maze and the passage of a few months, it would seal together seamless. But he didn’t have time left so he could use up some of his power to finish it.

Xiang Liu used his blood to create a maze and used ten sun stones that had accumulated tens of thousands of years of sun essence. He pushed his power through and the sap in the bucket started burbling upward like boiled water. Gradually the sap was absorbed by the doll until there was no liquid left in the bucket. When all the sap was absorbed, the big bellied laughing doll and the base was seamlessly bonded together without a shred of connection point. It was like the entire doll was made whole.

Xiang Liu used about half his power to try and pry open the doll again but even he couldn’t. He took out his weapon and tried to slash it but it made no mark on the doll. Xiang Liu finally smiled in satisfaction.

Furball stood on one leg and cocked his head quizzically to the side and stared at Xiang Liu like he was staring at a lunatic.

Xiang Liu gazed at the big bellied doll in his hand, the smiling face with the curving eyebrows and the pouting lips looked back at him with joyful mirth. Xiang Liu’s lips curled into a smile and he started chuckling out loud.

He put the doll into a bag and tied it to Furball’s back. Furball coo’d to ask and Xiang Liu replied “Go to Jade Mountain, tell Ah Bi that this is his wedding present to Xiao Yao.”

Furball’s bird eyes widened in shock and he hooted loudly in discontent, he didn’t know why something clearly made by the Nine Headed Demon would have to be given as something made by that winged fox! Xiang Liu smacked Furball on the head and coldly chastised “Don’t grumble, just do as I say!”

Furball complained loudly a few more hoots before he spread his wings and took flight into the night headed in the direction of Jade Mountain. Xiang Liu craned his head as he watched Furball fly further and further into the pitch black night sky.

Remembering our first meeting in Qing Shui Town, you were all shits and giggles, a mouth full of made up crap. But the only thing you said that was true was: I have no ability to take care of myself, no one to rely on, and nowhere to go.

After over tens years of teaching you archery, you now have the ability to take care of yourself. You don’t need to use your own body to protect someone you treasure when danger is around. The right man for you, you now have someone to rely on, you don’t have to be all alone anymore with solitude as your companion. The sky is vast and oceans deep, you now have a place to go and don’t need to be chased by people and be without a place to call home.

Xiang Liu thought to himself: Xiao Yao, from now on I can no longer stand watch to protect over you, you have to take good care of yourself, wishing you a lifetime of worry free happiness.