There’s positive K-drama news to report this week, with the conclusion of SBS Fri-Sat drama The Fiery Priest going out strong hitting 22.0% AGB nationwide for the final hurrah. There’s likely going to be a sequel as well as the last scene was a prescient We Will Be Back note with plenty of laughs to go along. The Fiery Priest has been top of the drama CPI buzz rankings basically its entire run but got knocked down to second place this week as tvN Wed-Thurs rom-com Her Private Life took first.

I’m glad HPL is getting buzz though I don’t think it’ll stay on top for long, the drama is so cute and sensible through the set up shenanigans. The title doesn’t even need to refer to the female lead Park Min Young’s fangirling as it does to male lead Kim Jae Wook wanting to be her protector because he thinks she’s a lesbian who can’t be with the love of her life best friend and he can’t get upset on her behalf because “it’s her private life”, lol. The drama landscape will likely be rather quiet for the next few weeks with the biggest arrival coming June 1 with epic fantasy world building sageuk Asadal Chronicles. END_OF_DOCUMENT_TOKEN_TO_BE_REPLACED 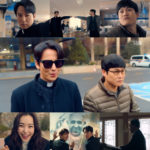 I’m adding a new K-drama to my watch and you should too! The surprise hit that is SBS Fri-Sat offering The Fiery Priest is a great weekend commitment, and starts the year off right for SBS finally doing something fresh … END_OF_DOCUMENT_TOKEN_TO_BE_REPLACED