The KOFIC assembled Korean Actors 200 list (consisting of both actors and actresses) is already fodder for discussion with fans wondering why their faves may or may not have been included. This is definitely a movie (Chungmuro) driven list so straight up drama stars will likely not make it and many of the included may not be household names but have been integral in the South Korean film industry. The second batch release is here and the most well known names and faces with Hallyu popularity include Lee Min Ho, Jung Hae In, Park Bo Young, Kim Nam Gil, Su Ae, Yeo Jin Gu, Kim Dong Wook, and Gong Myung among others. Check out the second release batch here, all gorgeous black and white spare images that captures these stars unique auras.

END_OF_DOCUMENT_TOKEN_TO_BE_REPLACED 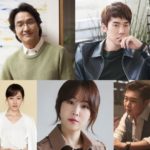 Looks like SBS wants to shake off the ratings doldrums with current Mon-Tues drama Moon Lovers: Scarlet Heart: Ryeo to try and recapture the audience with another medical drama to follow. Doctors with Park Shin Hye and Kim Rae Won … END_OF_DOCUMENT_TOKEN_TO_BE_REPLACED

I’m trying to keep my expectations low for Pinocchio which premieres in mere hours on Wednesday night in Korea on SBS. Forget the hyped up casting of Lee Jong Seok and Park Shin Hye, or whatever residual audience love remains … END_OF_DOCUMENT_TOKEN_TO_BE_REPLACED

Kyaaaaaa, now that’s what I call an eye-popping teaser that sells the OTP and plenty of playful cheer. The first official drama poster is out for It’s Okay, It’s Love, and I hope to god someone at SBS did their … END_OF_DOCUMENT_TOKEN_TO_BE_REPLACED