I thought getting a cab or designated driver would solve the drunken driving incidents common in high drinking countries including South Korea, but then it doesn’t solve the other potential drunken misconduct problems that could arise with a third party around. K-actor Lee Kyu Han, a seasoned character actor with tons of face recognition even if audiences don’t necessarily remember his name right off the bat, has stepped down this week from two upcoming K-dramas Again My Life and Green Mothers Club. The reason was due to his health problems. A day after the drama departure news, K-ent reported that Lee Kyu Han was being investigated by the police after a taxi driver reported that he assaulted the driver one night after drinking during the drive home. Lee Kyu Han’s agency has denied the assault allegations and says there is more to the story and will follow the police investigation to clear his name. His agency further clarified that his stepping down from the dramas is due to his anxiety and mental health in light of this police investigations. I hope the investigation gets sorted out and honestly I wish people can drink and just be happy goofy drunks instead of potentially belligerent ones.

END_OF_DOCUMENT_TOKEN_TO_BE_REPLACED 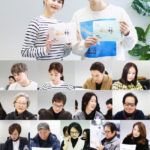 All the attention on weekend dramas right now is centered around KBS drama My Golden Life, which almost hit 45% AGB nationwide ratings in its latest episode and netted itself a two episode extension as well. I love the works … END_OF_DOCUMENT_TOKEN_TO_BE_REPLACED

How did this drama fly under my radar? Oh right, working, translating, etc. The upcoming TvN drama The Wedding Scheme starring Kang Hye Jung and Lee Kyu Han premieres this Monday on the cable network, and I am seriously loving … END_OF_DOCUMENT_TOKEN_TO_BE_REPLACED