Another 2023 premiering C-drama wrapped filming recently, the live action adaptation of Chinese Paladin 6 video game called Sword and Fairy. It stars Xu Kai and Yu Shi Xin (Esther Yu) and for the former he looks like he just swapped sets from his other upcoming drama Wonderland of Love and she’s doing another xianxia drama with Fairy in the title after this summer’s big hit Love Between Fairy and Devil. Neither are what I call good actors but he’s consistently good enough is the best I can say and she’s got charm aplenty as evidence by her large online fandom and continued improvement in acting based on broad feedback. CP6 is a wildly popular RPG game, not all CP games have the same level of player popularity hence the excitement for this one. I think Yu Shu Xin’s look in this first still looks so awful, not her fault but the stylist but then again I believe it’s the look of her character in the game so there isn’t much that can be done to deviate. Her second look is much better in the last picture but I can do with the massive breast plates on her battle costume.

END_OF_DOCUMENT_TOKEN_TO_BE_REPLACED C-actor Xu Kai’s got so many period C-dramas under his belt I swear seeing these first stills it felt like something I’ve seen before. He’s the male lead in the upcoming xianxia drama Sword and Fairy, which is the highly … END_OF_DOCUMENT_TOKEN_TO_BE_REPLACED 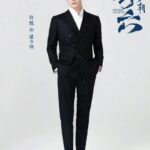 I’ve only recently gotten the appeal of some of the rising and popular young actors from the past 5 years, since after 2015 I really stopped watching C-dramas and without watching it’s hard to like or dislike anyone. So it’s … END_OF_DOCUMENT_TOKEN_TO_BE_REPLACED It feels like a past life almost to hear this drama series back in the news but it’s ripe timing for a new generation to get to experience it. C-ent has announced a new Chinese Paladin drama series called Sword … END_OF_DOCUMENT_TOKEN_TO_BE_REPLACED