This drama was discussed towards the end of last year 2022 but what was certain then is no longer. The K-drama The Price of Confession was a high profile project with PD Lee Eung Bok and he was signed on. This week PD Lee has left the drama explaining that his filming for the consecutive filming of the second and third seasons of Netflix drama Sweet Home currently in production is running long so he will no longer be able to make the schedule work to direct Confession. The production says a search is out for a new PD but won’t impact filming as the drama is not yet ready to roll and remains in early planning stages. The female lead offers remain out to Song Hye Kyo and Han So Hee and neither has confirmed or rejected the project at this time.

END_OF_DOCUMENT_TOKEN_TO_BE_REPLACED 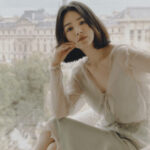 This sounds like an interesting story and interesting dual female lead led casting. Song Hye Kyo and Han So Hee are in talks to star in an upcoming drama titled The Price of Confession. It’s billed as a suspense thriller … END_OF_DOCUMENT_TOKEN_TO_BE_REPLACED