Excitement continues to mount for the upcoming two-fer Attack on Titan live-action movies. Consider me a convert with the just released second movie trailer, this was one story with such dense mythology and special effects needed I actually thought it was impossible for Japan to pull off a live-action adaptation. Not only has Japan managed to pull it off, it invested the funds to film two movies simultaneously with a scheduled release this August and September. I’m crazy about the second trailer, capturing the chaotic and apocalyptic feel of the story with all the actors selling me their characters, especially Miura Haruma as main lead Eren.

The second movie poster has also dropped, showing the Female Titan and the Colossal Titan along with main characters Eren, Mikasa, Armin, Sasha, Jean, Hans, and new character Shikishima, who is described as the best fighter so may be the substitute for Levi. It’s funny to see normally nerdy Hasegawa Hiroki (most recently seen as the noble unemployed male lead in Date) as the kickass dark horse warrior. There are tons of major characters missing from the live-action movie such as Reiner, Bertolt, Historia, Ymir, just to name a few, with of course Levi’s absence being the giant pink elephant in the room. Unless they are saving him for a surprise appearance at the end of the first movie or something like that. END_OF_DOCUMENT_TOKEN_TO_BE_REPLACED 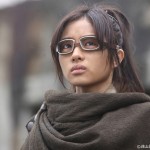 Attack on Titan is arguably the most popular manga in the world right now, with One Piece aging and Naruto just ended. Those reading along with the manga (me!) can see the story headed towards a final arc, or at … END_OF_DOCUMENT_TOKEN_TO_BE_REPLACED