On the scale of yay to oh hells no this is definitely on the terrible idea end of that spectrum. A top C-ent producer has purchased the official remake rights to MBC hit drama My Name is Kim Sam Soon, which actually got 50% ratings on its final episode which tells you that this one was among the biggest hits in K-drama land EVER. Sure it’s visually a bit dated now with the mid-aughts fashion as it aired in 2005 but the cohesiveness of the writing and directing paired with one of the best chemistry laden and stellar acting casting of Kim Sun Ah and Hyun Bin makes it one of many K-drama fans favorite dramas even now. Even C-netizens are wary of this remake, wondering which young male actor can pull off that Binnie’s asshole but endearing Jin Heon and an even bigger worry which C-actress is willing do gain some weight to believably play the normal sized Sam Soon. I think so much has to go right for a C-remake to succeed and honestly lightning in a bottle rarely strikes remakes.

END_OF_DOCUMENT_TOKEN_TO_BE_REPLACED 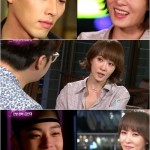 I love wit and sass and that’s something Kim Sun Ah has in spades, and an additional reason why I love her aside from her insane chemistry with all her male costars. She sells attraction like no other, when many … END_OF_DOCUMENT_TOKEN_TO_BE_REPLACED

There was once a K-drama on my top-10 list. I raved about it here and there, trilling that it was so amazing and wonderful and everyone must watch it. This was a long time ago, when I first started watching … END_OF_DOCUMENT_TOKEN_TO_BE_REPLACED

I realized today that I’ve been blogging on AKP for exactly for six months. I started on June 8, and I took a look at the view count and realized that (holy mother of Zeus!) I am edging close to … END_OF_DOCUMENT_TOKEN_TO_BE_REPLACED