The 2020 Baeksang Awards held on June 5, 2020 will take place without an audience for the first time in its history but at least it will take place and be broadcast. The nominations were released today on May 8th and there are a few surprises of who was in and not in but mostly I am really pleased! The Best Drama nominations went to When the Camellia Blooms, Hyena, Crash Landing on You, Kingdom 2, and Stove League. I’m surprised not to see Itaewon Class, The World of the Married, and Hospital Playlist there but the latter hasn’t aired enough episodes so may be eligible next year. Best Actor nods went to Hyun Bin, Namgong Min, Joo Ji Hoon (for Hyena and not Kingdom), Kang Ha Neul, and Park Seo Joon.

Best Actress is STACKED oh wow even K-netz is saying this is the toughest race – Kim Hee Ae, Gong Hyo Jin, Son Ye Jin, Kim Hye Soo, and IU, and yes IU feels like the young outlier and I wouldn’t have nominated her this year for Hotel Del Luna as she really should win more for My Ahjusshi. I’m thrilled for so much love thrown at Crash as supporting roles there also got nods – Seo Ji Hye and Kim Sun Young both in Best Supporting Actress, and gruff Yang Kyung Won for Best Supporting Actor, and even Kim Young Min got a Best Supporting Actor nod except its for Married and not his role in Crash.

END_OF_DOCUMENT_TOKEN_TO_BE_REPLACED 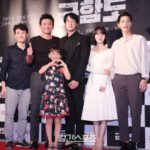 There may be a new standard in quality and quantity of star attendees to the VIP movie premiere of period war escape movie Battleship Island. I saw one of my faves Yoo Seung Ho trading his ruler period garb for … END_OF_DOCUMENT_TOKEN_TO_BE_REPLACED

Now this looks like a great Summer popcorn flick! The first teaser trailer has dropped for the upcoming Korean movie Pirates, which of course garners the immediate association that it’s going to be a Korean version of Pirates of the … END_OF_DOCUMENT_TOKEN_TO_BE_REPLACED