At least we know one actor will not be the leading man – T.O.P. (Choi Seung Hyun) has denied reports that he will star in this drama. On the other hand, it could end up being Lee Je Hoon, who is currently starring in the hit tvN thriller drama Signal. He’s reportedly received the offer for the leading man and is considering the role. I’m so indifferent to Lee Je Hoon that his involvement keeps the drama on the back-burner for me unless either the story or other cast members pique my fancy. So far dude getting revenge through mastering noodle fu does not sound all that appealing. END_OF_DOCUMENT_TOKEN_TO_BE_REPLACED 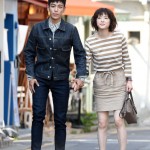 In a cross-border production that isn’t one of those ubiquitous Chinese-Korean joint drama/movie, there is a Japanese-Korean drama currently being filmed in Seoul that stars Big Bang member TOP with top J-actress Ueno Juri. The K-media was out in force … END_OF_DOCUMENT_TOKEN_TO_BE_REPLACED

The 18th annual Busan International Film Festival (BIFF) kicked off yesterday in the seaside town of Busan, South Korea with lots of glam and anticipation. Featuring 301 movie selections from 70 countries shown over 10 days, BIFF has cemented its … END_OF_DOCUMENT_TOKEN_TO_BE_REPLACED

A bevy of top K-stars have been selected to model Cartier LOVE jewelry for this year’s Cartier Korea charity event, which has selected the International Vaccine Institute to receive a donation of a portion of Cartier’s proceeds from the December … END_OF_DOCUMENT_TOKEN_TO_BE_REPLACED

Yoon Eun Hye was in NYC last month doing an endorsement for Calvin Klein that was used as pictorials in various magazines. Her individual shots were featured in Dazed and Confused, but she and TOP (of Big Bang fame) did … END_OF_DOCUMENT_TOKEN_TO_BE_REPLACED