C-drama Unchained Love has aired 22-episodes out of the total 36 so it’s into the final stretch of airing and I thought to check in. Surprisingly the reviews and audience feedback is getting better, I noticed since about episode 14 the chatter has turned positive and not just from the diehard fandom. I think it’s much too long for a drama to start getting good as most general viewers will have left by then but it’s also a positive thing for the drama ultimately as it can win back viewers and also hope for a solid complete airing when it finishes. I don’t think this drama will deliver another boost to Dylan Wang‘s popularity the way Love Between Fairy and Devil did but at least it doesn’t hurt it and he’s staying in the limelight consistently to maintain his buzz.

END_OF_DOCUMENT_TOKEN_TO_BE_REPLACED 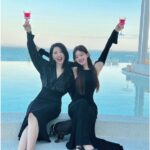 Watching Asian dramas for over three decades not only has seem my tastes age as I have but it’s also followed plenty of stars from their own leading man/woman days to their playing dad/mom days. Most recently I did “what … END_OF_DOCUMENT_TOKEN_TO_BE_REPLACED