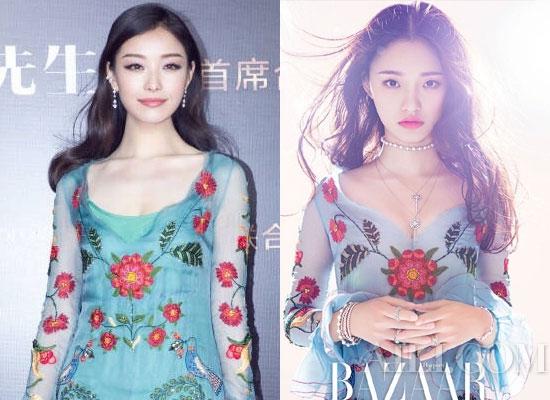 C-netizens are buzzing about Feng Shao Feng‘s high profile current and ex-girlfriend being spotted in the same dress, which isn’t all that problematic but for the two ladies being visually very similar in goods and aura. A-list actress Ni Ni recently attended an awards ceremony in Gucci‘s long blue flower pattered dress, and the same recently appeared on rising young actress Jelly Lin (Lin Yun) in a Bazaar China pictorial. Reportedly Jelly insisted on wearing that Gucci dress and the photoshoot was after Ni Ni wore it to the event, so take away what you will from that. Ni Ni is one of the undisputed C-actress goddesses so intentionally wearing anything she’s pulled off seems like a glutton for punishment if you ask me. Nineteen year old Jelly is fresh and young and cute but Ni Ni’s aura is on another plane. Aside from Ni Ni and Jelly, this particular Gucci dress has recently shown up on a few other A-list Chinese stars – Gao Yuan Yuan, Bai Bai He, and Sun Li all donned it for various magazine photo shoots. Now I’m just waiting for the K-actresses to start wearing it en masse.