The ball drops on Times Square as a tradition of ringing in the new years, and for the last few years Korean tabloid Dispatch has had the tradition of breaking a surprising K-ent dating news on New Years Day. For 2016, this one is likely a doozy for K-pop fans but less so for K-drama viewers as neither are active in the small screen acting world. JYJ‘s Junsu (formerly of DBSK) is dating hot new girl group EXID‘s most prominent member Hani. Dispatch snapped pictures of the couple entering and exiting Junsu or his manager’s apartment for dates on several occasions in the past month. Once news broke, both sides quickly confirmed it and revealed that the two are indeed dating. The relationship is reportedly around 6 months in, with the two bonding over their shared musical interests and career. Congrats to the first big K-ent couple of 2016! END_OF_DOCUMENT_TOKEN_TO_BE_REPLACED 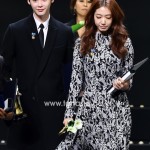 The awards season seems to have expanded in scope, or else I simply never paid much attention to this particular award until now when my babies are being feted together. Hallyu stars Lee Jong Seok, Park Shin Hye, Jeon Ji … END_OF_DOCUMENT_TOKEN_TO_BE_REPLACED

The highly anticipated second full album from JYJ has finally dropped its opening track “Back Seat” along with a stylish new MV. I don’t recall ever seeing Jaejoong, Yoochun, and Junsu looking so collectively smoking hot. Usually one or two … END_OF_DOCUMENT_TOKEN_TO_BE_REPLACED

Lotte Duty Free added some fresh new faces to its already bulging line-up of spokespersons. Supposedly the concept is to add new Hallyu to the existing Hallyu stars, but I’m not quite sure if being selected is an honor since … END_OF_DOCUMENT_TOKEN_TO_BE_REPLACED