Man, I wanted to love this drama so bad, partly from the still lingering good will towards Allen Ren (Ren Jia Lun) for The Blue Whisper and also because I’m still on a C-drama binge. Thousand Years for You had all the ingredients for my tastes – past love, pretty Republican era costumes, spunky girl lead who goes after what she wants, and a totally capable male lead there to get shit done. Alas it’s like the production took a cool Xianxia era idea and then botched it in the Republican era story framework. Allen plays General Lu Yan, a prince of yore who fought the evil Fairy tribe and fell for its warrior Princess who turned good and tried to stop her own people. She died, he died, or maybe neither died, but three thousand years later she’s back as a local mountain bandit gang leader and he’s back as himself but with magical powers and memories of the past.

Four episodes in and I in good conscience cannot stomach watching more. Lu Yan is so far dull as beans, both Allen playing him straight and the character having no expression or broader personality other than he’s back to save his OTP princess’s soul or maybe her present day incarnation whatever it ends up being. He’s actually the less offensive of the two leads, Li Qin needs to fire her agent because whomever thought her character Bandit Leader Yu Deng Deng is a good idea to play is on crack. She’s supposed to be the gender switched version of the pillage, steal, maybe rape “bandit” caricature but with all the bad stuff just play pretend and joked about all the time, including her forcing men to “be her wife” but it’s one not funny to begin with joke that goes too long and falls too flat. The directing is cheesy (surprising this came from the same director who did The Untamed) and groundwork not laid for developing the romance. We don’t see the past yet so there is only the annoying present day budding relationship to go on and it’s wholly unpalatable to start off I don’t have the stomach to watch until I actually start to like them together. Sadly this is a drop for me.

END_OF_DOCUMENT_TOKEN_TO_BE_REPLACED 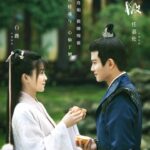 You can call me late to this bandwagon but it doesn’t matter when one watches C-drama One and Only (周生如故 Zhou Sheng Ru Gu). The period romance aired on August 18, 2021 and is considered one of the biggest successes … END_OF_DOCUMENT_TOKEN_TO_BE_REPLACED Holy, this sounds like a fanfic made solely for all my C-drama kinks because the stuff I don’t like much are minimized and the stuff I love are maximized. The first teaser video is out for upcoming xianxia meets Republican … END_OF_DOCUMENT_TOKEN_TO_BE_REPLACED

I feel like period C-dramas are once again leveling up, not just putting pretty faces on screen with flashy costumes and special effects, some recent dramas have delivered tightly directed visuals that play a big part in the overall production … END_OF_DOCUMENT_TOKEN_TO_BE_REPLACED