This is awful and such an invasion of privacy in every way, I feel terrible for Taiwanese singer-actress Cyndi Wang who just launched her 2017 World Tour for her latest album and is now dealing with a scandal. This week a Facebook user posted a picture of Cyndi in an intimate and private moment, she’s in her undergarments and resting in bed, and that picture clearly was taken by someone in a romantic relationship with her. Her ex-boyfriend actor Yao Yuan Hao admitted he took the picture during their four year relationship but denied sharing it to anyone and now leaking it on a public forum such as FB. Both stars agencies are taking a strong stance to chase down the poster, and thankfully all news publications have been heeding journalistic standards and is reporting on this case without actually posting the picture in question. I’m so appalled this keeps happening because what a star does in their own private lives as long as it’s not criminal should completely stay private. END_OF_DOCUMENT_TOKEN_TO_BE_REPLACED 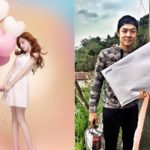 I’m not going to feel scha denfreude to hear this news but there are some who are understandably going to react with a “you get what’s due” sense of inevitable. TW-news is reporting that dating stars Cyndi Wang and Yao Yuan … END_OF_DOCUMENT_TOKEN_TO_BE_REPLACED

I wish I could unsee this but it’s seared into my brain now that Lego Lee can clearly self-uglify to the point where I wanted to stage an intervention. This weekend SETTV held its own drama awards to fete its … END_OF_DOCUMENT_TOKEN_TO_BE_REPLACED

I really can’t figure out China’s fascination with Qiong Yao. I think Taiwan has finally said sayonara to her, but the C-media still loves to revere her as some goddess of romance dramas. I loved her stuff from the 80s … END_OF_DOCUMENT_TOKEN_TO_BE_REPLACED