I liked the premise of C-drama Go Princess Go better than the execution, because goodness was it so low rent it was basically rent-a-costume with whatever haphazard acting could be summoned up for the plot. But the “what if” was so fun to ponder – a modern day playboy male transported in soul back to the past into the body of a royal princess. In the K-drama version tvN drama Queen Cheorin (Mr. Queen), female lead Shin Hye Sun has all the boyish/manly affects down but still charms with the bright personality, because a dude can also be funny, playful, and eccentric. The straight man is played by Kim Jung Hyun as her husband the King and also as an imbecile puppet by day and secret avenger by night. That his secret is less shocking than hers is even funnier. The second set of official drama posters are just as good as the first, showing the two different tableaus of the oddly married who just seem like they could be in a bromance if they knew everything about each other.

END_OF_DOCUMENT_TOKEN_TO_BE_REPLACED 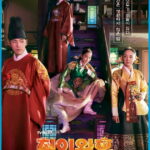 I’m so excited for tvN sageuk Queen Cheorin that I’m not even annoyed it can’t settle on an English drama title. I think using the Korean title would be best but first it went with No Touch Princess and now … END_OF_DOCUMENT_TOKEN_TO_BE_REPLACED